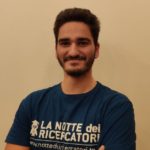 The main rationale for using charged particle therapy in cancer treatment is based on the localized energy deposition inside the patient, which translates into a superior sparing of normal tissue compared to conventional radiotherapy with photons. This advantage can be fully exploited if an accurate verification of the match between the therapeutic beam stopping point and the tumor position is available. Mispositioning potentially translates into an under-coverage of the tumor as well as an over-dosage of the healthy tissue, which can significantly hinder the treatment efficacy.
To overcome this limitation, several strategies ha

ve been investigated. They are all based on secondary particles produced by the interaction of the primary beam with the patient’s body and with energy high enough to be detected outside the patient. The secondary radiation yield has been demonstrated to be strictly correlated to the energy and interaction point of the primary particles. The first monitoring method clinically applicable was the Positron Emission Tomography (PET), which however provides an off-line verification (i.e. after the treatment has been delivered). On-line approaches rely on the detection of prompt gammas (PG) or charged fragments generated by the nuclear interactions of the primary beam with the patient.
In this talk, I discuss a novel strategy for real time dose verification exploiting PGs. The methodology is based on the detection of prompt photons whose production is enhanced with a non-radioactive element transported selectively to the tumor with a drug carrier. Nuclear interactions of the element with the beam result in a signature PG spectrum, from which the position of the tumor can be reconstructed. The element choice is the key to obtain a PG spectrum significantly different from the background produced by the body and also for physiological considerations (as uptake and toxicity effects).
To provide a proof-of-principle of this methodology in proton therapy, I performed Monte Carlo calculations with Geant4. I simulated the interaction of a 20 MeV proton beam (a typical energy in the tumor region) with a thick target made of four different elements: 19F, 45Sc, 63Cu and 89Y. I investigated the spectra of PGs exiting the target and assessed the enhancement with respect to the spectrum emitted by a target made of tissue-equivalent material (i.e. the background). This study has demonstrated that the enhancement is possible in a clinical-like conditions. The second step of this study is focused on experimental measurements aimed at validating the Monte Carlo simulations and at developing a gamma tracking system for reconstructing the PGs emission vertex point, from which the tumor position can be estimated.