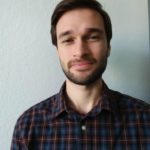 A model of modified gravity obtained via a Palatini f(R)-like extension of the Holst action in presence of an Immirzi field is considered. The scalar field characterizing Palatini f(R) theories in the Jordan frame acquires a dynamical character sourced by the Immirzi field and the theory features propagating torsional degrees of freedom. We found an analytical solution describing an asymptotically Anti-de Sitter, topological black hole endowed with scalar hair. The black hole thermodynamics is studied via Euclidean path integral methods and a signature of the Immirzi field appears in the expression for the entropy which is modified with respect to the standard area law. We compute the thermodynamic volume conjugate to the pressure due to the cosmological constant and we observe a violation of the reverse isoperimetric inequality. The resulting super-entropic black hole’s thermodynamic stability is studied in reference to the recently proposed conjecture that super-entropic black holes are thermodynamically unstable. Finally, in light of the symmetry of the model under projective transformations of the independent connection, we study the geodesic and autoparallel deviations showing that only the former is invariant.