Plasma discharges for energy storage: the case of Dry Reforming of Methane 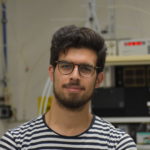 One of the most significant challenges of our century is the replacement of fossil fuels with clean energy sources, in particular renewable ones. However, renewable energy sources (RES) are both intermittent and inhomogeneous on the globe. A promising approach to tackle these limitations is the so-called Power-to-Fuel technology. It consists in the conversion of electrical power, most common product of renewable energy sources, into chemical energy.
One of the possible realizations of the Power-to-Fuel concept is based on the plasma discharges used to promote highly endothermic reactions starting mainly from CO2, the most abundant greenhouse gas. An electrical discharge is directly powered by electricity; thus, it can use excess energy from the grid to produce value-added products.
The advantages of using electrical discharges mainly concern the possibility to generate a strong non equilibrium gas environment in which energy demanding reactions are favored. This happens because the energy is not fed into the system by heating but with more complex processes driven by the energetic species constituting the plasma.
In my talk, I will present a nanosecond-pulsed discharge used to drive the Dry Reforming of Methane
(CO2 + CH4 → syngas + hydrocarbons). Dry reforming is a very endothermic reaction, still impractical at industrial scale, but its high energy request makes DR an opportunity for the storage of renewable electricity.
While the importance of converting CO2 into valued energy vectors is out of question, the addition of methane may appear pointless since CH4 is already fuel.
However, a discharge reactor provides the possibility of an in situ conversion of CH4 into energy vectors easier to handle, avoiding the transportation issues related to its low energy density per volume.